Friends, family and supporters were recently treated to a celebration of talent at BIMM Brighton’s Diploma Showcase, which took place at Komedia in the heart of the Laines. Students took over two stages for the event, demonstrating their creativity in a range of genres; from Grunge to Rap. BA (Hons) Music Journalism student Emma Sherar was in attendance to review the event. 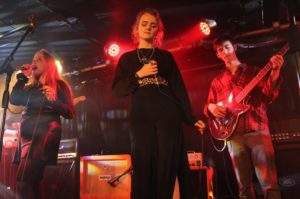 The evening started off strong, with a mosh pit forming within the first half-hour. Emo-Rock five-piece ‘Dysfunction’ brought high energy vibes as they opened the upstairs stage with unique and theatrical movements from their captivating vocalist.

The event wasn’t just about celebrating the talent of the acts. It was also a night of fun, as proven by many eccentric costumes that graced the stage throughout; from matching sunglasses to the eccentric blonde wig rocked by a member of ‘Asthmatic Pistachio’, whose set dominated the stage with covers versions from Scott Pilgrim Vs The World and Guardians of The Galaxy. Level 2 band, ‘Blouse and Skirt’ showed true professionalism while continuing their cover of  The Killers’ hit ‘Somebody Told Me’ despite their frontman losing his voice part-way through. With help from his bandmates, he was able to complete the song to receive one of the biggest cheers of the night from the audience. ‘Pop-Up Jesus’ saw a collaboration of charming female vocalists working in unison to produce a number of classy original compositions. Their set brought some more chilled vibes to the downstairs stage, with the unique addition of a saxophonist for one of their songs.

‘New Shoes’ closed the upstairs stage, their lead singer’s deep, powerful vocals reaching the back of the room. Their slick cover of Tom Grennan’s ‘Found What I’ve Been Looking For’ was the perfect end to the celebration, with the audience showing their enjoyment by clapping along to their tracks. The night saw an incredible display of support from peers, staff and friends as each act was welcomed with raucous cheers to the stage. The showcase was a resounding hit demonstrating incredible talent from each band and showing the hard work each performer had been putting in across the term.

Find out more about studying a Diploma course at BIMM Brighton.