First Ever End of Term Gig at BIMM Berlin

It was an exciting milestone at our new campus as BIMM Berlin’s first end-of-term celebrations took place, marking the completion of a fantastic opening semester.

Of course it had to be a bit special, and when the venue is Berlin’s awesome UFO Sound Studios, how could it not be?

Housed in the historical C. Schneider Brewery built in 1891, UFO Sound Studios is famous for both its cutting-edge technology and vintage analogue equipment. It also includes a giant underground bunker around a thousand square metres in size which the visiting musicians couldn’t wait to explore! 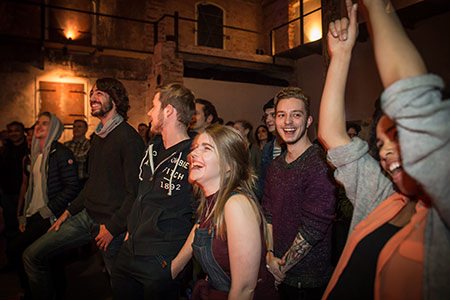 Friends, family, staff, music industry guests and fellow BIMM Berlin students made up an excited crowd ready to hear some live music and celebrate. Opening artists for the night were Berlin band Eveline who were followed by performances from some of the Live Performance Workshop ensembles that came together in their first term.

Head of Songwriting Kieron Pepper and Vocal Tutor Shon Abram, who tutored the ensembles, were also the witty and welcoming comperes for the evening. Outstanding performances came from Montag Mania, Celine Love and Thomas & Severin, while legendary Gordon Raphael showed particular interest in We Are Us, so watch this space! More music treats came from the headline act all the way from Brighton, Aniseed Treats. Overall it was a fitting display of talent and a really great party to round off the hard work of the first term. Vaseema Hamilton, Executive Principal of BIMM Berlin said:

“It was a night of true celebration, not only for BIMM but for all our BIMM Berlin students, with some truly some outstanding performances.”

After the bands played, DJ Inka Newmann brought some authentic Berlin beats to the speakers for a late party, while some of the students celebrated the end of a brilliant first term with an impromptu jam of their own. There’s lots more music where that came from, it’s going to be a great first year for BIMM Berlin!